Journey to the Amazon

In the last two posts I wrote about my visit in 1985 to the Incan ruins of Machu Picchu in Peru.  My Peruvian adventure, however, began with two nights in the Amazon rainforest.  Although the Amazon River is most associated with Brazil, it is born from the melting snows of the Andes from where it flows 4000 miles eastward, crossing nearly the entire breadth of the South American continent, to the Atlantic.  Half of Peru, everything east of the Andes, is in the Amazon Basin.

After flying to the capital city of Lima, I continued on a flight to Iquitos, the major city in the Peruvian Amazon.  Ocean-going ships can travel over 2000 miles up the Amazon to Iquitos.  The city is accessible only by boat or plane.  It is the largest city in the world inaccessible by road.

My flight was on the now defunct domestic carrier, Faucett Airlines.  (It was the only airline in the world with in-flight bingo games!  Bingo is very popular in Peru.)

I was met at Iquitos Airport and driven to the riverfront where I boarded a small boat to take me to my hotel. 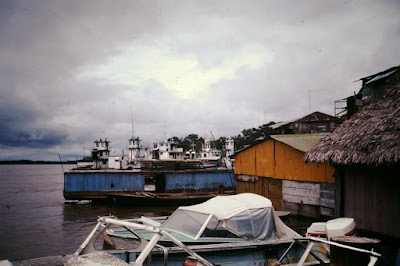 This picture, taken from the boat, gives you an idea of how mighty the Amazon is.  The boat was in the middle of the river, so you can see that even at this point, far upstream, the river is very wide. 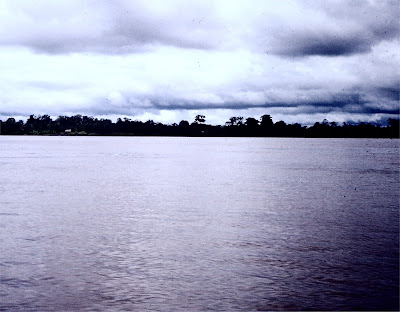 Although the Amazon is not the longest river in the world (that record is held by the Nile), it is by far the largest in terms of the flow of water.

Leaving Iquitos far behind, we eventually turned onto a small tributary, and arrived at my hotel, the Amazon Jungle Lodge.  The hotel consists of several buildings with thatched roofs.  The buildings and the walkways connecting them are all built on stilts because during the high water season the river overflows its banks. 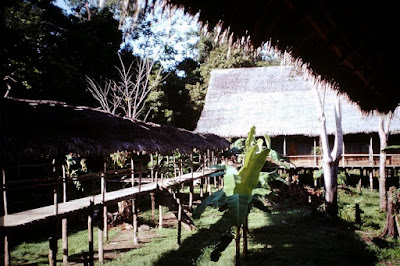 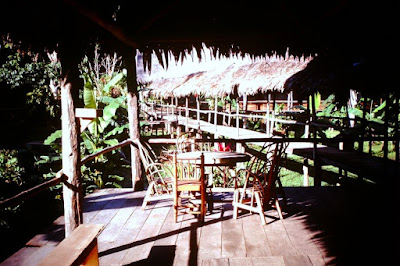 This was my room.  As you can see, the accommodations were far from luxurious.  The ceiling of the room is a screen to keep out anything that might otherwise enter through the thatched roof. 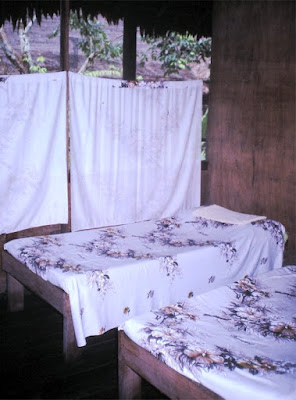 Here I am with one of the hotel's residents, a little green parrot named Marú.  Marú was quite talkative.  He (she?) liked to say "Viva el Peru" (Long live Peru), and "Corre, corre, caballito" (Run, run, little horse). 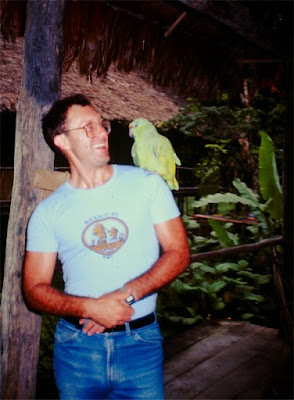 After settling into my room, I was taken upstream to a small indigenous village to see native life on the river.  I am sure that the whole thing was staged.  I can imagine the villagers saying, "Tourists are coming.  It's time to take off our tee-shirts and jeans, and put on our grass skirts." 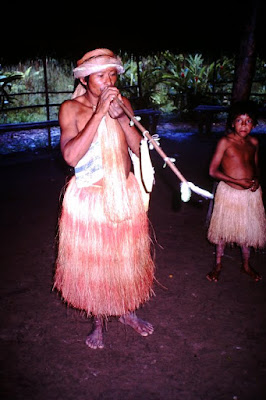 ﻿
The village elder is posing here with a blowgun that I purchased.  They had a variety of handicrafts for sale.  However since they do not exist in a money economy, tourists must barter with them.  The tour information that I received before the trip said that I should bring some small household items... like needles and thread... to trade for their handicrafts.

I lugged around that blowgun for the rest of my trip through Peru and Ecuador.  I had no problems until I returned to the U.S.  I was not allowed to carry it with me onto the plane for the last leg of my flight home.  They put it in a box and checked it with my luggage.  The ironic part is that it wasn't until I returned home that I discovered that it was not a functional blowgun.  It wasn't hollow all the way through!

The elder gave a demonstration with a large, genuine blowgun. 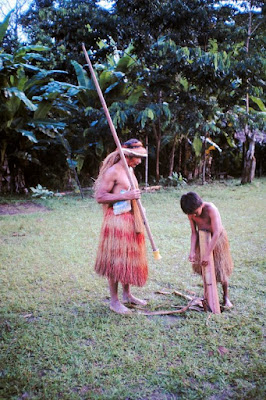 I was given a chance to try my luck.  Needless to say, I was unable to shoot the dart anywhere near the target. 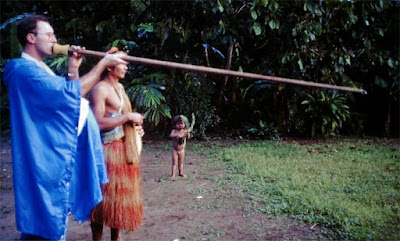 ﻿
One of the most incredible experiences in the Amazon was one for which I have no photos.  We went out on a boat the first evening to look at the night sky.  I have never seen so many stars in my life!  We are so used to our "light pollution" that what I saw seemed unreal... but that was what the sky truly looks like.

The next day we were taken out on a small boat to go fishing.  I'm ashamed to admit it, but prior to this I had never been fishing.  What did I catch?  A piranha!  Of course, I let the boatman remove it from the hook. 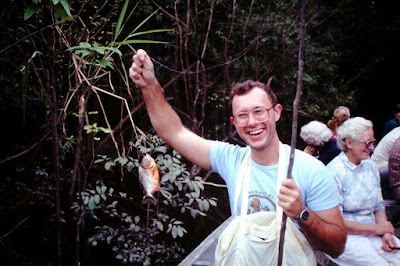 Later that afternoon, one of the hotel guides took me for a hike through the forest.  The guide was a young fellow named Clever. (Yes, that was his name.  He said to me, "That means 'smart' in English.") 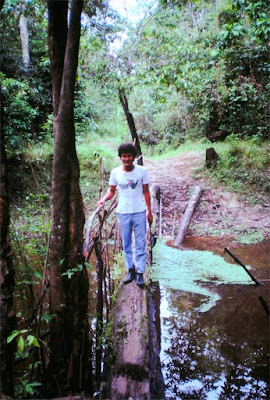 We did not see any snakes or jaguars on our hike.  Most animals have retreated deeper into the rainforest.  There were a lot of insects however.  Clever was constantly swatting away mosquitos.  I however was slathered in repellent, and I never had a bite the entire time I was there.  (The expensive malaria pills which the doctor prescribed before the trip, turned out to be unnecessary.)

Although I didn't see any wildlife, the vegetation was amazing.  Here I am standing in front of a huge tree.  That entire background is the trunk. 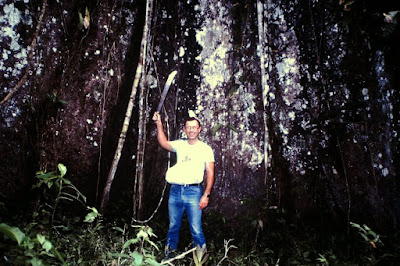 After two days in the rainforest, a boat took me back to Iquitos, and I took a plane back to Lima. 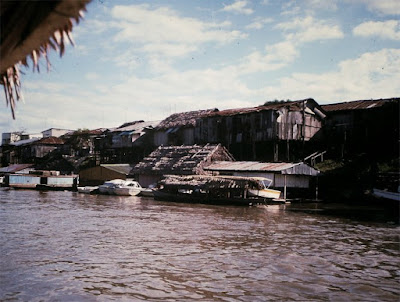 Even though I was "roughing it", the Amazon excursion was thoroughly enjoyable.  In fact, I don't think I have ever been so relaxed.in my life.  It seemed as if the worries of the world were a thousand miles away.
Posted by Retired Teacher at 7:32:00 AM