Yesterday I was invited to a dinner party at the home of my friends Nancy and Fred.  Nancy is a retired math teacher from the school where I taught.  Regular readers will recognize her and her husband Fred because in 2014 I took them on a tour of the Yucatán.  Also invited were our former colleagues Jane and Carol.  Jane, who taught Spanish with me, was featured in this blog when we traveled to Mérida, Yucatán, and then again, last winter, on our trip to Oaxaca.  Carol, taught French as well as an occasional Spanish class, and was chairperson of the foreign language department.  She also traveled with me to Mérida, but that was before I was writing the blog.

Nancy had received a "paella kit" last Christmas as a gift, and wanted to have the gang over for a Spanish dinner.  We were supposed to get together in March, but it had to be postponed.

I made "salmorejo", a Spanish cold soup similar to gazpacho.  (I posted my recipe for "salmorejo" in March.)  Everyone liked the soup.  It is garnished with chopped hard boiled eggs and ham.  I actually found a store nearby that sells packages of imported Spanish ham, but it is extremely expensive.  So I used the next best thing... prosciutto. 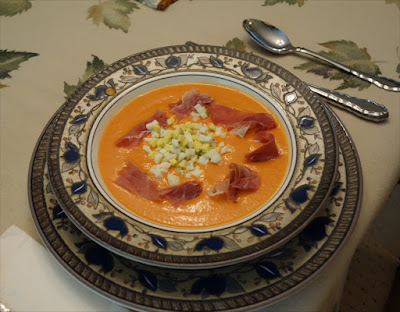 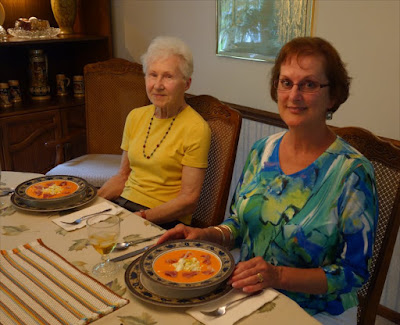 Carol, to the left, and Jane, to the right
Then came the paella, a saffron-flavored rice dish that originated in Valencia, Spain.  Nancy used chicken instead of shellfish.  (Did you know that the original recipe for paella was made with chicken and rabbit?) 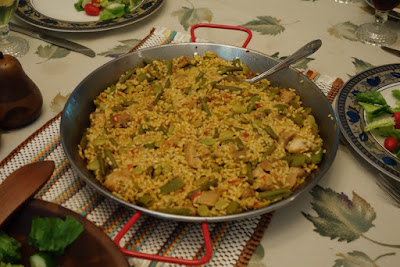 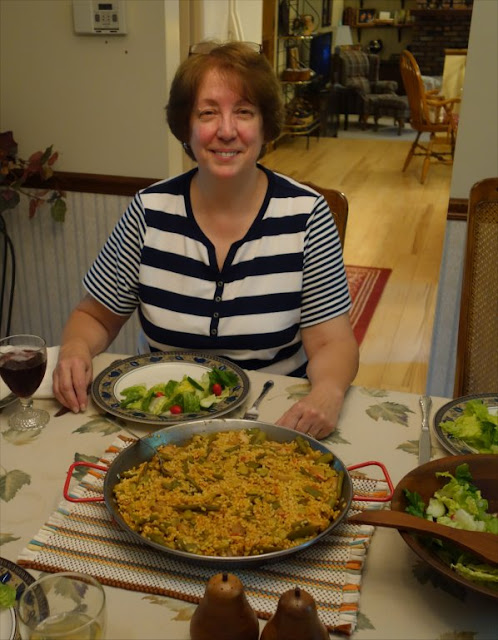 "Chef" Nancy with her paella.  It was delicious!!
(I just realized that I didn't get a picture of Fred.  He was busy taking photos at the same time that I was.  Sorry, Fred.)
﻿
It was a wonderful evening, and my thanks to Nancy and Fred for their hospitality and friendship!
¡Muchas gracias!﻿
﻿
Posted by Retired Teacher at 8:58:00 AM