My first day in Mexico City is usually spent running errands and grocery shopping.  Yesterday was no exception.  First I walked a few blocks to the Superama store to stock the refrigerator and pantry of my apartment.  After I put the groceries away, I headed out again and went to the nearby bank located on the ground floor of the World Trade Center.  There I hit the ATM, and I also paid the gas bill for the apartment (a whopping $10 US).

The water bill for the apartment comes every other month... and it always arrives the month that I am not staying here.  By the time that I am here, the bill is past due.  As a result, I cannot pay it at the bank.  I have to go to a city government office located about one mile away.  It is a pleasant walk through the neighboring district of Colonia del Valle.

Just across the street from the office is the most recognizable landmark of Colonia del Valle... a 32 story office building which used to be known as the "Torre Mexicana". 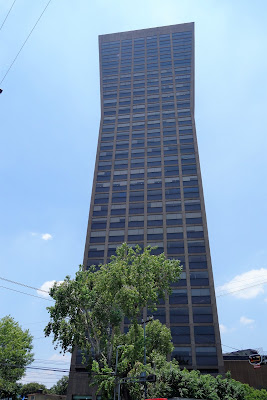 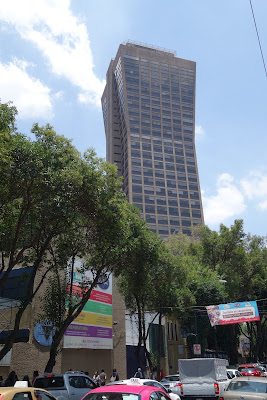 I did a bit of research on this building.  The structure was completed in 1984 and served as the headquarters of Mexicana Airlines.  In 2003, seven years before Mexicana went bankrupt, the building was sold.  It is now the Mexican headquarters of a multinational insurance company.  Its name is officially "Torre AXA", although many people still refer to it as "Torre Mexicana".

The skyscraper was built with the highest safety standards, and is considered one of the safest buildings in Mexico City.  The year after its completion, it came through the 8.1 earthquake of 1985 unscathed.

I paid the water bill, took a few pictures of the Torre Mexicana, and then headed back to the apartment.  It was around 2 PM, and my route took me past the Colombian restaurant where I have eaten a couple times on previous trips.  So I stopped in, and had the inexpensive but tasty meal of the day.  For 80 pesos (less than $5) I had lentil soup, a pork rib, mashed plantain, rice and salad.

Now that my chores are out of the way, this morning I am heading out to do some sightseeing.