My Two Cents Worth on San Miguel de Allende 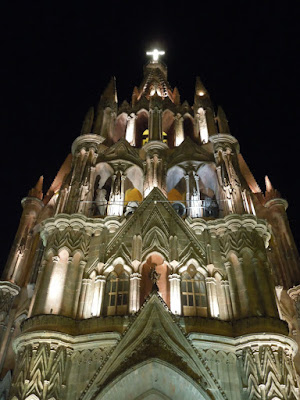 Right now, the biggest topic of discussion among bloggers who write about Mexico is the news that Travel & Leisure Magazine has named San Miguel de Allende the top tourist destination in the entire world.  So I figured that I might as well jump in and give my opinion.

First of all I do not subscribe to Travel & Leisure.  I have leafed through a few copies while waiting in the doctor's office, and I can definitely say that I am not in the magazine's target audience.  I do not stay at luxurious, five star hotels.  (Why pay big bucks for a room when I am going to spend most of my time out and about seeing the sights?)  I am not interested in the hottest, new nightspots.  (Heck, I am usually thinking about bedtime when such places are starting to get busy.)  I enjoy good food, but I have found that trendy restaurants that critics rave about are often disappointing.  Although I am not a backpacker staying in frugal hostels, I am not an upscale traveler, and I do not look to Travel & Leisure for vacation guidance.

The blog posts that I have read generally mock the magazine's choice.  My friend Barbara, the author of "Babsblog", lives in San Miguel and adores the town.  But even her recent post is tinged with a bit of skepticism and a dose of concern over increased tourism in her adopted town.

I have to wonder why it is necessary to proclaim someplace as the #1 destination, and who makes such a decision.  There are so many fascinating places in the world.  How can any one town be proclaimed the champion of the planet?  From what I have read, there was a good deal of misinformation in the Travel & Leisure article.  It makes one wonder just how much research was done.

I am not badmouthing San Miguel.  It is a beautiful town, and I have enjoyed my visits there.  However the country is full of beautiful towns, and (sorry, Barbara) I would not rank it as my favorite place in Mexico, much less the world.  I first visited San Miguel in the 70s when I traveled to the colonial towns of the region known as the Bajío.  Back in those days San Miguel already had a sizeable ex-pat population, but it was not the busy tourist mecca it is today.  The couple days that I spent there were very pleasant, but the town in the Bajío that most captured my imagination was Guanajuato.  I would also rank Mérida and Oaxaca above San Miguel, and there are several lesser known towns such as Valle del Bravo and Malinalco that are on my list of favorites.

The sad thing is that when a place becomes touted as a "must-see" destination, the economy may benefit, but much is lost in the unique atmosphere of the place.  A good example is the Mayan archaeological site of Chichén Itzá.  When I first visited the ruins in the 80s, it was a magical place.  Then, when Cancún became a "mega-resort", hordes of tourists in tour buses arrived.  The problem was exacerbated when Chichén was named one of the New Seven Wonders of the World.  Now the place is jammed with visitors, you are no longer allowed to climb any of the ruins, and vendors hawking tourist junk are omnipresent.

Barbara writes in her blog that there are days when the historic center of San Miguel suffers gridlock along its narrow streets.  How is the town going to cope with the possibility of an even greater invasion of tourists?