An Afternoon in San Angel

On Friday I took the Metrobus south to one of Mexico City's most picturesque neighborhoods, San Angel.  San Angel was once a separate village, and it became a country retreat for wealthy city families.  In the 20th century it was absorbed into the sprawl of Mexico City, however it has retained a distinctive atmosphere.  The wealthy still live behind the walls of the grand, old houses.  But it has also become a center of fine dining, art galleries, and upscale handicraft shops.

An uphill walk from the Insurgentes Avenue took me to the Church of San Jacinto, the heart of the neighborhood. 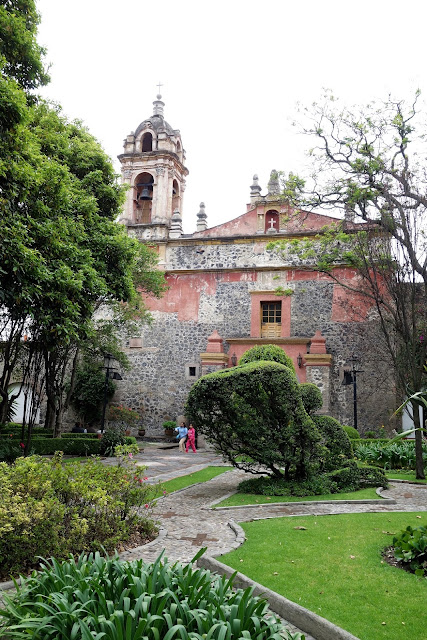 San Jacinto dates back to 1580, making it one of the older churches in Mexico City.

The interior of the church... 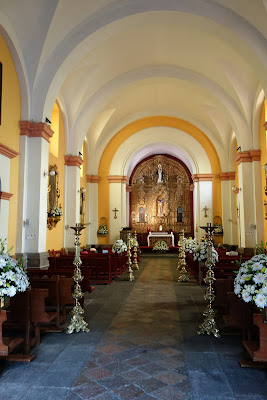 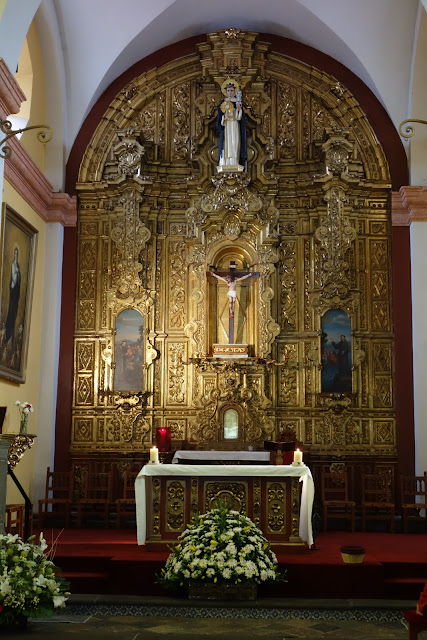 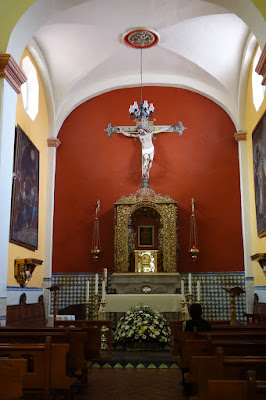 The atrium of the church is one of the loveliest in Mexico.  In fact there are signs reminding visitors that this is not a public park, but church property. 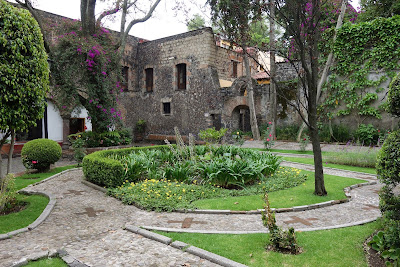 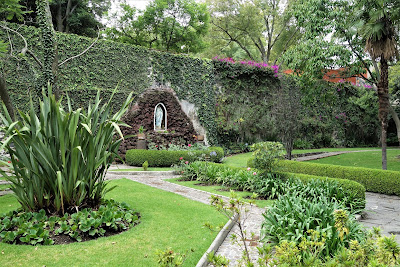 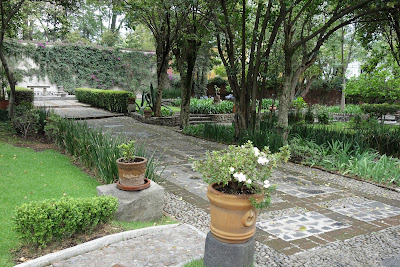 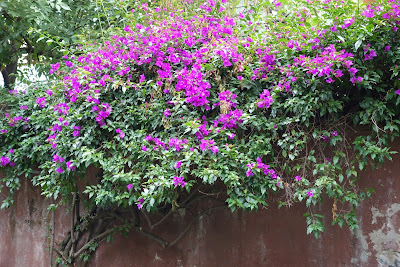 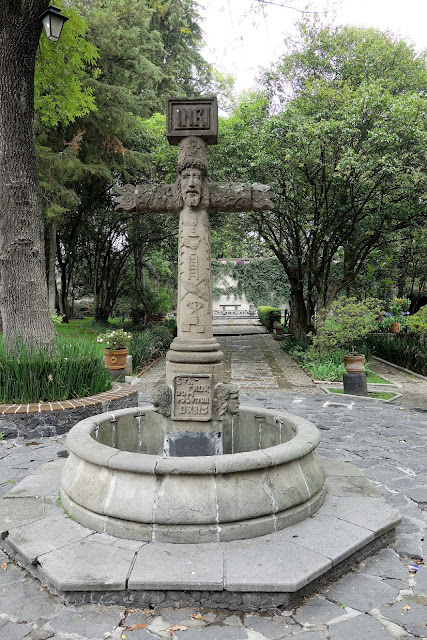 In Mexico it is common for a stone cross to stand in the atrium in front of the church.  The stone cross here is one of the oldest, and its design, with a mixture of Christian and pre-Hispanic elements, reflects the indigenous artisans who built it.

I really was not intending to do any more souvenir shopping while in San Angel.  However I came across some shops that I had not seen before, and it was hard to resist. 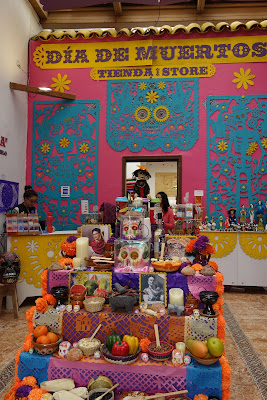 This little store, "The Day of the Dead Shop", was filled with handicrafts, most of them related to the "Día de los Muertos" celebration.  There were loads of "calaveras" (skulls made of pottery, or paper mache) and "Catrinas" (the popular skeleton figurines).   At the entrance there was an "ofrenda" (a Day of the Dead altar set up in memory of someone who has passed away).  This "ofrenda" was dedicated to the celebrated painter Frida Kahlo.

I ended up buying something here.

The door at the rear of the store leads to a separate shop which features hand-made crochet items. 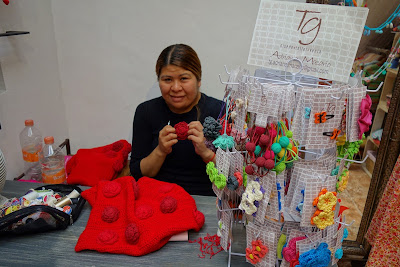 And again I could not resist buying something small that will easily fit in my suitcase!

Down the street is one of the neighborhood's colonial landmarks, "La Casa del Risco". 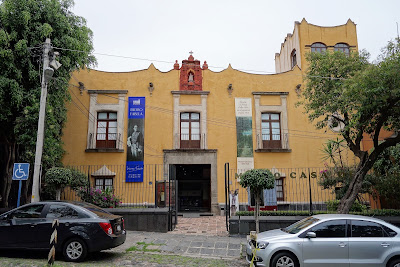 This colonial house dates back to the 17th century.  In the closing days of the Mexican American war, it was used as a barracks by the invading U.S. army.  In 1938 it was bought by Isidro Fabela, a well-known Mexican politician, judge, diplomat and writer.  He restored the house to its former grandeur.  Prior to his death, Fabela donated the house and his art collection to the Mexican people.

Today the house contains several galleries exhibiting paintings, sculptures, furniture and decorative arts, mostly from the Baroque era of both Europe and Mexico.  There are also rooms for temporary art exhibits.

The highlight of this museum, however, is the incredible fountain in the courtyard of the house. 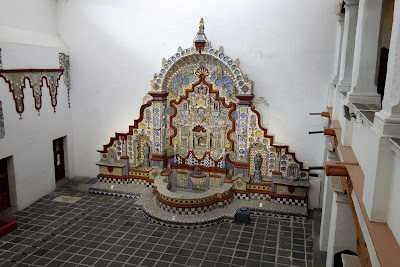 The fountain is considered an artistic treasure of colonial Mexico and an example of the ultra-Baroque style of the 18th century.  It is decorated with tiles, seashells, pieces of porcelain, and plates. 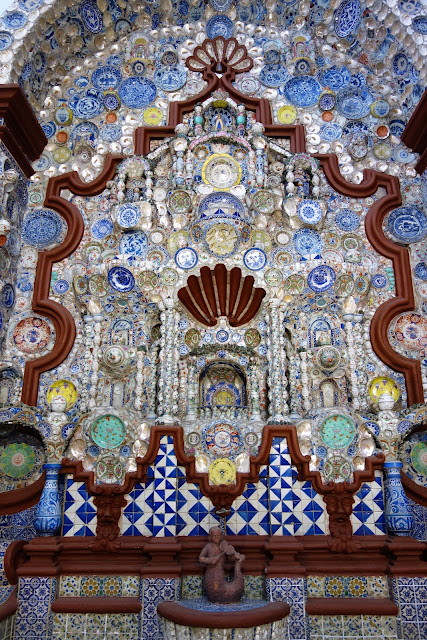 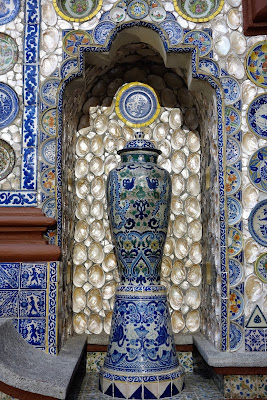 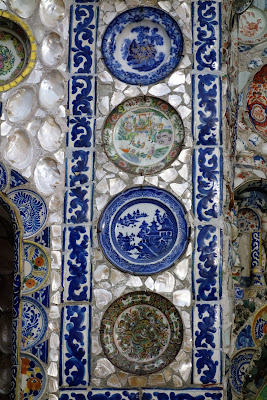 The fountain in itself is worth a visit to the "Casa del Risco". 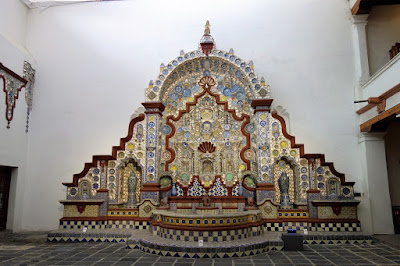 While walking around San Angel, I noticed the building where they have the weekly "Bazar Sábado" (Saturday Bazaar).  I had not been to San Angel's bazaar since the 1970s, and I decided that perhaps a trip back to San Angel on Saturday would be a good idea.