Last week I wrote about the terrible traffic accident in which I was involved.  Although I was already 99.9% sure that my car was totaled, I received word from my insurance agency that it was indeed a total loss.  Yesterday I went out to buy a new car.  Even though I have not yet received an insurance check, I wanted to get this over with before I leave for Mexico next month.  I wanted another Prius, and the dealership had several on the lot.  The styling of the new model is different from my old car, but I chose the same color that I had before.  I did not care that much for the other colors that they had available.

I figured that once I had purchased a car, I would have to call a friend to follow me to the rental car agency so that I could drop off the rental, and then drive me back to the Toyota dealership to pick up my new one.  However, the salesman told me that I could leave the rental there, and that he would call Enterprise to pick it up.  So in a matter of a couple hours I drove away with a new car! 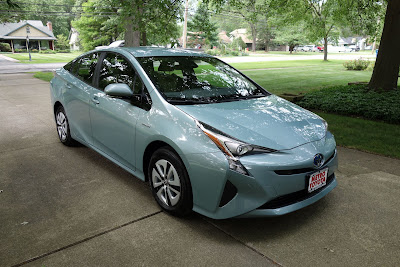