From our base in St. Ignace on Michigan's Upper Peninsula, Alejandro and I spent two days exploring Mackinac Island.  This little island, about 4 square miles in size, is located in Lake Huron near the Strait of Mackinac.  It is probably the most historic place in the Midwestern United States (the entire island is listed as a National Historic Landmark), and since the late 1800s it has been a popular summer resort.  The island only has around 500 permanent residents, but in summer the population swells when hotels, shops and restaurants open to serve the influx of tourists.  Among the shops are numerous businesses which make the island's famous fudge.  Few tourists, I suspect, leave the island without buying some fudge, and visitors to the island are referred to as "fudgies".

We reached the island via one of the ferry boats that leave frequently from St. Ignace.  (There is also ferry service from Mackinaw City on the Lower Peninsula.)  The boat brings you to the busy harbor of the town. 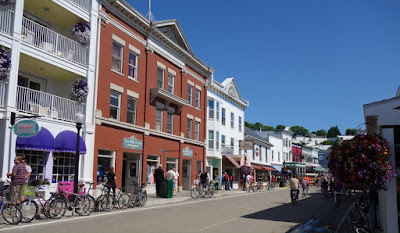 Main Street in the town.
The island's unique atmosphere is enhanced by the fact that there are no cars allowed.  The only motorized vehicles are emergency and service vehicles.  All transportation is by foot, horse drawn carriage or bicycle.  Shortly after we arrived, Alejandro and I rented bicycles to tour the island. 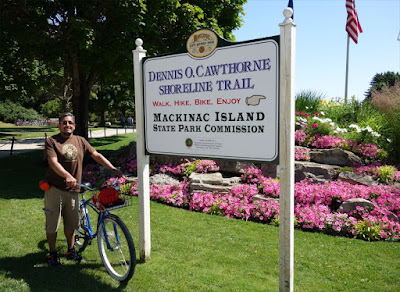 As we headed out of the town, we passed St. Anne's Catholic Church.  Although the building dates from the 19th century, it traces its history back to the French mission established by the Jesuits in the 1600s. 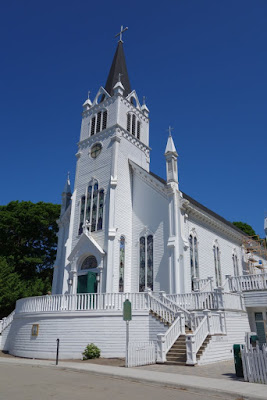 The island is circled by an 8 mile road... the only state highway in the United States which does not have any automobile traffic.  The beaches of the island are rocky.   In the past few years it has become a custom for tourists to pile the stones on top of each other.  All along the shore you see these stacks of stones... some of them are rather tall and elaborate. 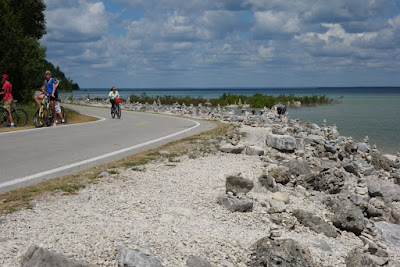 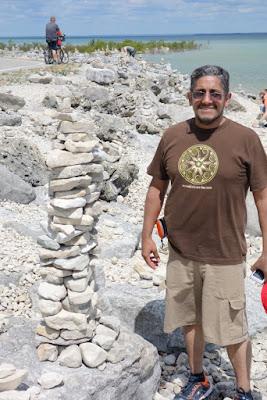 We parked our bikes to climb this flight of over 200 steps... 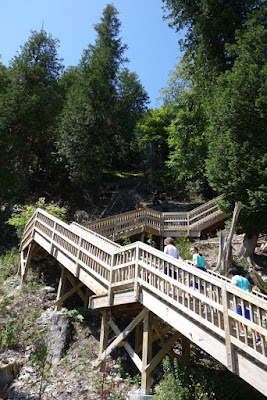 Looking down from the staircase at the crystalline waters of Lake Huron... 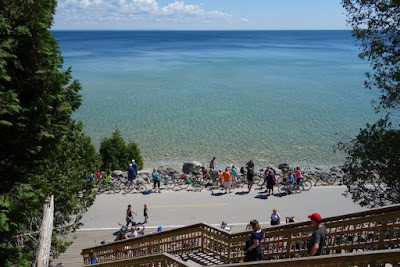 The staircase leads to an observation deck with a view of the island's most interesting geological formation, Arch Rock. 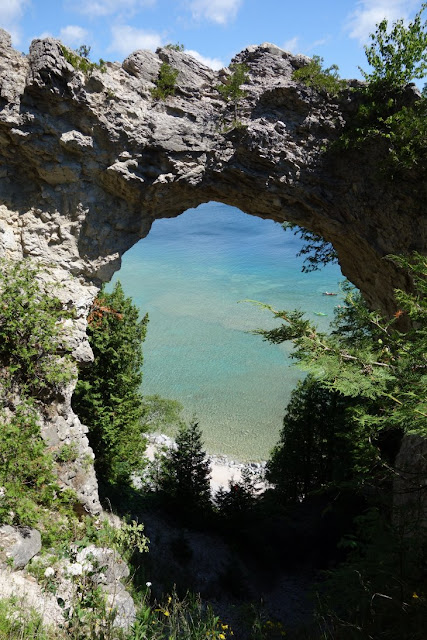 The beach known as British Landing is the spot where British troops invaded the island during the War of 1812. 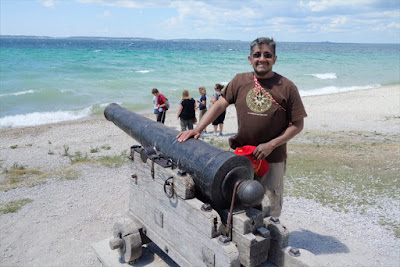 Upon returning to town, we made a detour to visit one of the island's most famous landmarks, the Grand Hotel.  The hotel was opened in 1887, and Thomas Edison, Mark Twain, and five U.S. Presidents were guests here.  There is a $10 charge for non-guests to visit the grounds and public areas of the hotel.  It's a bit of a rip-off, but better than paying $300 per night to stay there. 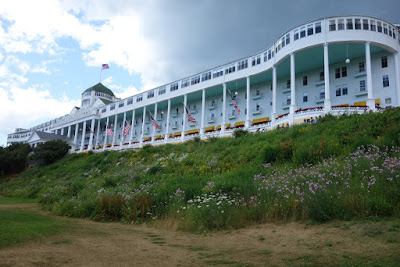 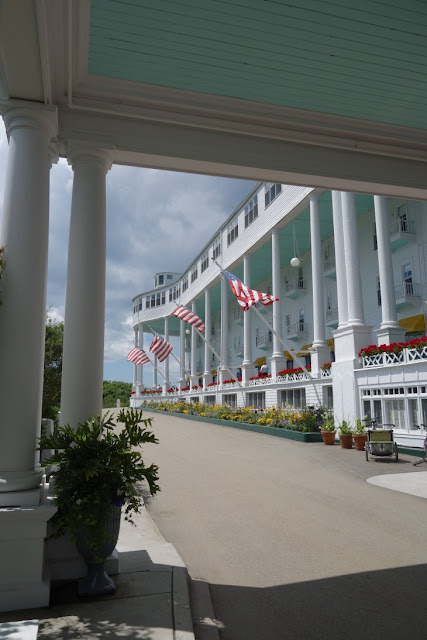 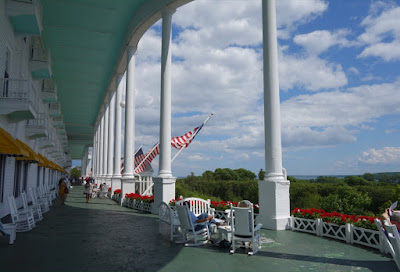 The hotel boasts the longest porch in the world.
The 1980 film "Somewhere in Time", a cult classic starring Jane Seymour and Christopher Reeve was filmed at the Grand Hotel.
Just beyond the hotel on the West Bluff of the island is a street lined with Victorian era summer "cottages".  Most of these "cottages" are spectacular mansions... and their flower gardens are just as spectacular. 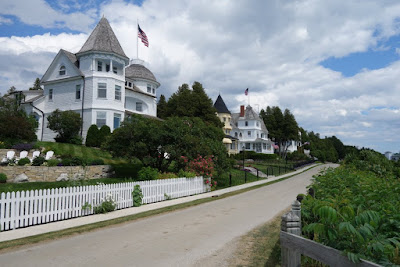 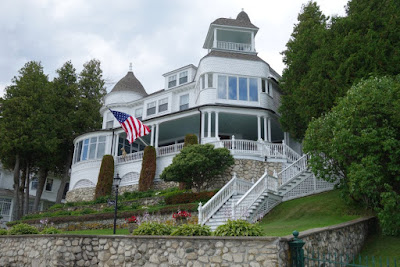 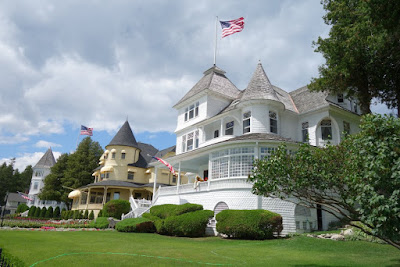 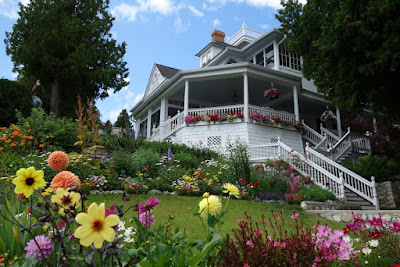 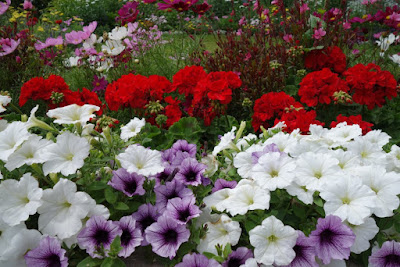 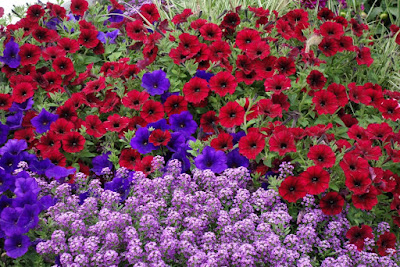