This is one of the plants that is now flowering in my garden.  Can you name it?  (This is more difficult than it might at first glance seem.) 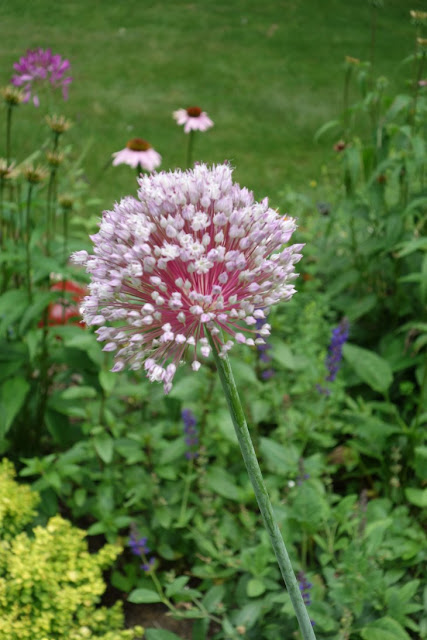 Good luck!
Update - We have a winner!  Joan continues her streak with the correct answer of "leek".
I thought that someone would answer ornamental allium.  (Actually, the first answerer, Sparks, was not far off that mark by answering "onion", since the ornamental allium is also known as a "flowering onion".)  I have tried to grow ornamental alliums but within a couple years they would die.  I have read that these perennials are very easy to grow, but the one thing they don't like is too much water.  Well, you saw a few posts ago that my yard is subject to periodic flooding.  In fact today we are once again drying out from another heavy rainfall.
Some years ago, when I had a vegetable garden, I tried growing leeks (another member of the allium family).  I noticed that the leeks produced a rather pretty flower, somewhat similar to its ornamental cousin.  I no longer have a vegetable garden, but I have planted some leeks in one of my beds strictly for its flower.  For several years now (knock on wood) the plants have continued to come up and flower each year.  I hope that this summer's heavy rains don't do them in.
Congratulations to Joan for her correct answer! ﻿
Posted by Retired Teacher at 8:47:00 AM