My constant traveling schedule has pushed my hobby of landscape painting to the back burner.  I used to do a lot of painting.  I was even a member of the local fine arts club, participated in their shows, and sold a painting from time to time.

Now I am generally doing just two paintings per year.  One is a small canvas which I use for printing off my own Christmas cards, and the other is to donate to the annual charity auction of the Ohio chapter of "Los Amigos de las Américas".  The auction is held each April, so each year when I return from my winter trip to Mexico, I must get started painting.

The picture is already about one fourth completed, and, as usual, the theme is Mexican.  I picked a photo that I took last year as the inspiration. 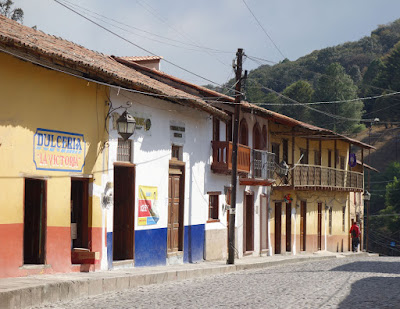 I took this photo of a typical street scene in the small town of Tlalpujahua, a picturesque former mining town in the mountains of the state of Michoacán.  I say that it is the inspiration for my painting, and not a faithful rendering.  Already there are enough differences between the painting and the photo that it is more than just "artistic license".

The canvas is fairly large... 36 inches by 24... so I have been working diligently on a nearly daily basis.  I must finish it by the end of the month, and deliver it to member of the auction committee.  Once again, I will not be able to attend the auction, since I will be in Mexico again when it is held in mid-April.

I will post a photo of the painting here when I have completed it.