The only major tourist attraction in the Mexico City neighborhood of Nápoles where I have been staying is a structure adjoining the World Trade Center known as the "Polyforum Siqueiros". 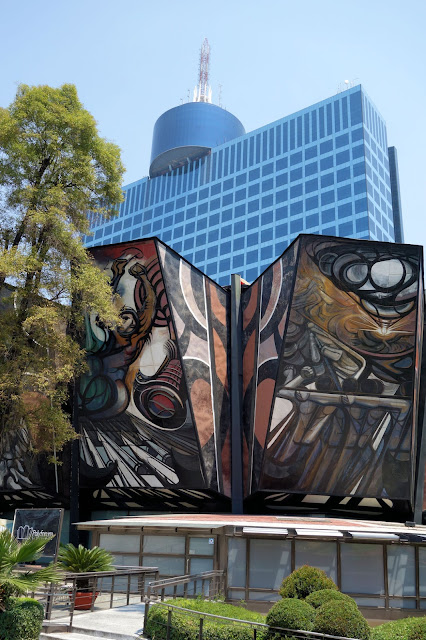 This center for cultural, political and social events was built in the 1960s as a part of the complex which includes the present day World Trade Center.  (Originally, the tower which houses the World Trade Center was planned as an enormous hotel... "el Hotel de México"... which was slated to open in time for the 1968 Summer Olympics in Mexico City.  The project ran over schedule, and the proposed hotel never opened.  Eventually, the tower was renovated as the office building and convention center that it is today.)  The "Polyforum" features murals by the famed painter David Siqueiros (1896-1974).  The exterior has twelve large panels representing themes such as "Music", "Dance" and "Mythology".  Inside there is a gigantic round hall known as the "Foro Universal" which contains Siqueiros's largest mural , "The March of Humanity".  The outside and inside paintings cover over 93,000 square feet, and taken together comprise, according to the "Polyforum", the largest mural in the world.

I visited the "Polyforum" a few years ago, and, although Siqueiros is not my favorite artist, the vast expanse of the murals is very impressive.  Since I started renting the condo in Nápoles I pass the "Polyforum" constantly, but on the last couple trips, I have noticed that it has been closed to the public.  In fact, the entire grounds are blocked off with construction barricades.  A major renovation project is underway.

Over the years the exterior murals have deteriorated due to weather and air pollution.  Those paintings are going to be restored to their original vibrancy.  I did not realize that there are even murals on the roof of the building.


Those paintings have suffered the most severe damage, and they, too, will be restored.

But there is much more to this project than just sprucing up the paintings.  The public area around the "Polyforum" is going to be reconfigured, and a sleek, high-rise building will go up between the cultural center and the World Trade Center.

A portion of the building will be cantilevered with mirrored windows which will reflect the paintings on the roof of the "Polyforum".

From the public terraces of the building, the northern panels of the exterior of the "Polyforum" will be more visible than previously.

The other side of the building will be designed with a tribute to Siqueiros that will be seen far down Insurgentes Avenue. 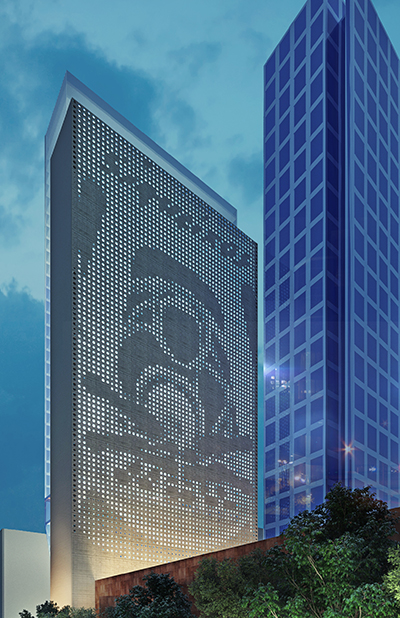 The plans look quite spectacular, but I have not been able to find any completion date listed anywhere.  From what I have seen passing the site, construction has not even begun yet.  It could be years before the "Polyforum" is open to the public again.