One of my travel destinations about which I have not written up to now is Puerto Rico.  I have visited the Caribbean island three times.  The first time was back in 1985.  I took my father on a Caribbean cruise the Christmas after my mother had passed away, and we had one much too brief day in San Juan.  Subsequently I took two other trips, flying to Puerto Rico to do more extensive sightseeing and to visit a high school friend who is a lawyer in San Juan.

My favorite part of the island is Old San Juan, the colonial heart of the island's capital.  I dug out my old slides, and uploaded a few of them to the computer to show you a bit of that picturesque city.

San Juan was founded in 1509 by Juan Ponce de León (whom we remember for his exploration of Florida in search of the "Fountain of Youth").  The town was originally named Puerto Rico (Rich Port).  By 1521 the settlement was renamed San Juan, and Puerto Rico was used as the name for the entire island.  Old San Juan is built in a defensive location on a small island at the entrance to the harbor.  It is connected to the mainland of Puerto Rico by bridges. 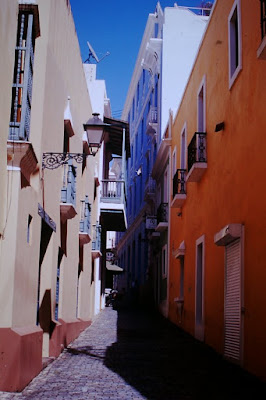 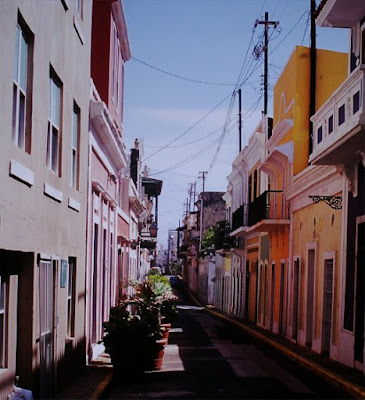 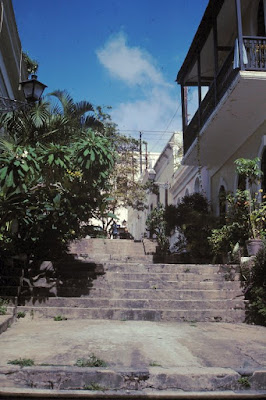 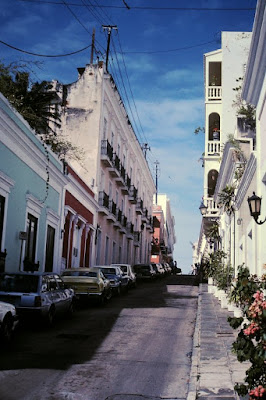 A monument to Christopher Columbus, the first European to visit the island... 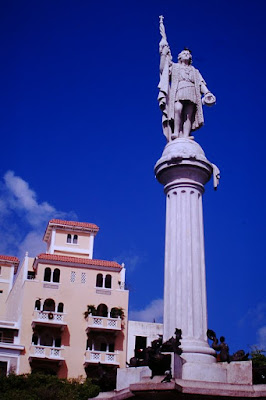 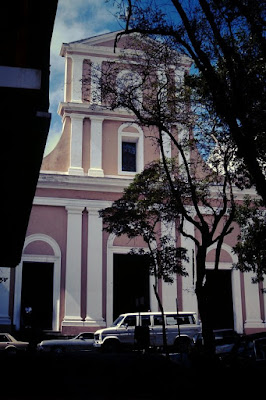 Inside the cathedral is the tomb of Ponce de León. 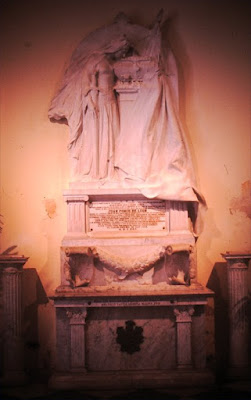 
The Church of San José, built in 1532, is one of the oldest structures on the island. 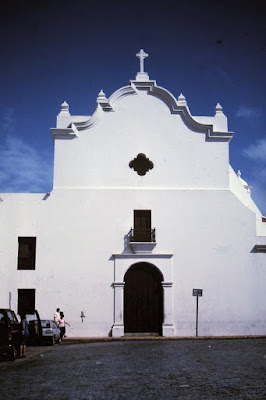 Another historic sight in Old San Juan is "La Casa Blanca" (the White House).  It was built in 1521 as a residence for Ponce de León and his family.  However, he never had a chance to occupy the house because he was killed on his ill-fated expedition to Florida before it was completed.  Today it is a museum filled with colonial furnishings. 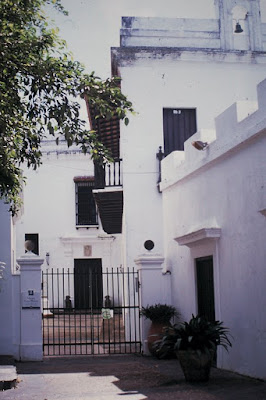 San Juan was a major port for the treasure ships headed back to Spain.  Because of this, the city was a target for pirates, including Sir Francis Drake.  To defend the city the Spanish
built walls around San Juan and constructed two large fortresses.  The more famous of the two, El Morro, stands at the entrance to San Juan harbor. 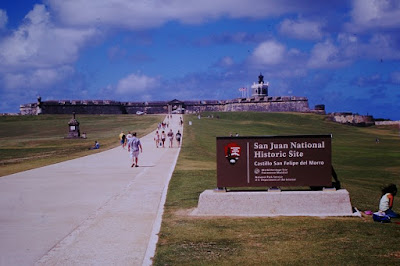 The fort was begun in 1539 and was enlarged throughout the colonial period.  When Puerto Rico became a United States territory as a result of the Spanish-American War of 1898, El Morro became a U.S. army post.  In 1961 control of the fortress was transferred to the National Park System, and it became part of the San Juan National Historic Site.  El Morro is a UNESCO World Heritage Site, and today it is one of the most visited tourist attractions in Puerto Rico. 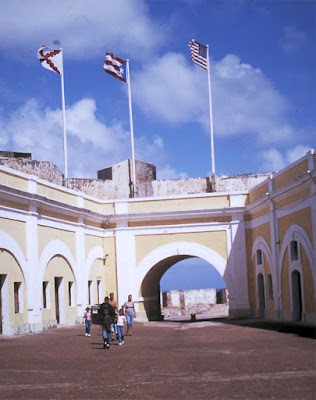 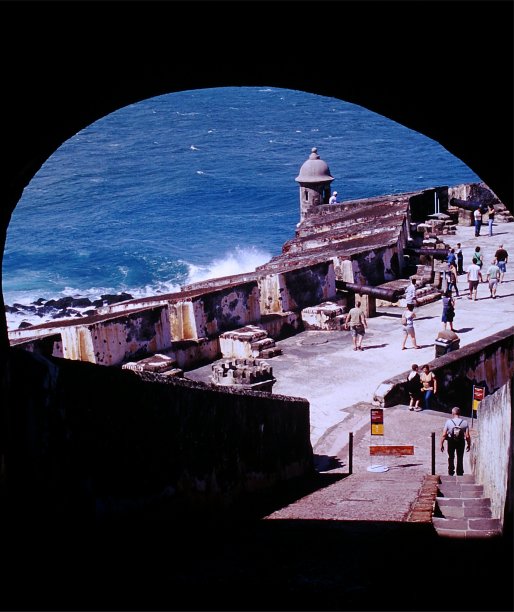 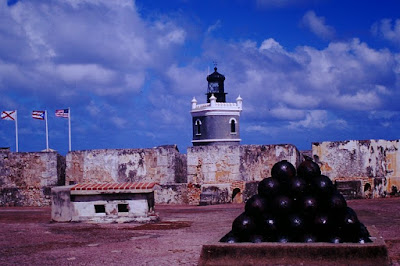 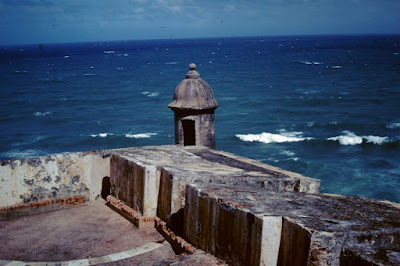 At the opposite end of Old San Juan is another fortress, the Fort of San Cristóbal.  It was built in 1783 to protect the city from land attack.  It is also part of the San Juan National Historic Site. 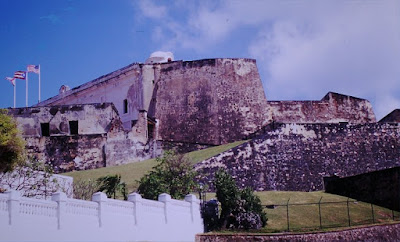 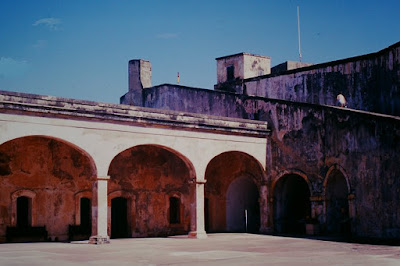 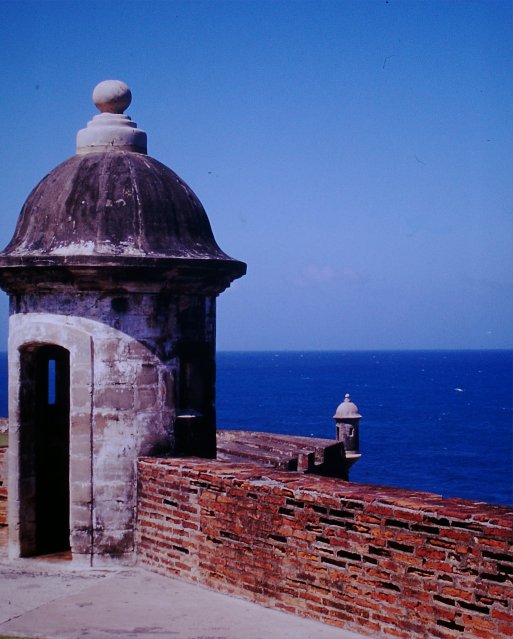