Gazpacho, a cold tomato soup which originated in southern Spain, is fairly well known here in the United States.  (However, what is served here is often a bright red soup that is quite different from genuine Andalucian gazpacho.)  There is a variation of gazpacho which I think is even tastier and easier to make.  It's called salmorejo.

I had never heard of salmorejo until a trip to Spain that I made in 2004.  I was at a charming sidewalk restaurant in the old town of Seville when I first saw salmorejo on the menu.  I asked the waiter what it was.  He told me that it was similar to gazpacho, so I ordered it.  I loved it, and it is now one of my favorite Spanish recipes.

I was invited to a dinner party which was supposed to be held today.  Since the theme of the dinner was Spain, I volunteered to make salmorejo, even though it is best on a hot summer day.  I made a double batch of salmorejo yesterday, and shortly after finishing I received a phone call.  Unfortunately the dinner party had been cancelled.  Oh well, I had plenty of salmorejo all for myself!

The soup is generally garnished with Spanish "serrano" ham and hard boiled egg.  I had not boiled the eggs before I got the phone call, but I did have the closest thing to "serrano" ham that you can find around here... prosciutto.

So here is my salmorejo... 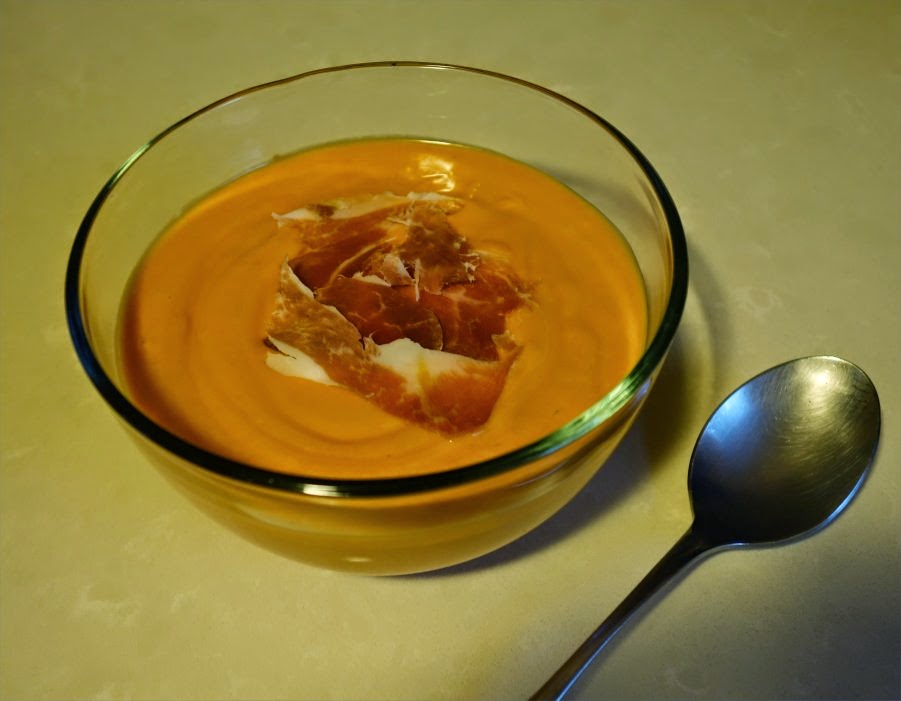 The soup is very thick and has a velvety texture.  It tastes just like the salmorejo that I had years ago in Seville.
On this blog I have described many delicious meals that I have had on my travels.  However, I have never shared with you any recipes.  So here is the easy recipe for authentic salmorejo...
Approximately 2 pounds of ripe tomatoes  (I use plum tomatoes.)
1 clove of garlic, chopped
1 full cup of bread crumbs  (I have used dried bread crumbs in the past, but this time I used slices of Italian bread which I toasted lightly and then tore up.)
Approximately 1 cup of extra virgin olive oil
Red wine vinegar (Some recipes call for Spanish jérez -sherry- vinegar.  I found a bottle of imported jérez vinegar in the grocery store, but when I saw the price of $23, I decided that ordinary red wine vinegar was good enough!)
Sugar
Salt
Put the tomatoes (you don't have to skin them!) and garlic in an electric blender and blend them together.  (Depending on the size of your blender, you might have to do this in 2 batches.)  Add the bread crumbs and blend some more.  Gradually blend in the olive oil.  Season to taste with a splash of vinegar, a pinch of sugar and salt.  Blend at high speed for 2 minutes.  Refrigerate.
Serve cold with a garnish of ham and hard boiled egg.
¡Buen provecho!
﻿
Posted by Retired Teacher at 7:52:00 PM