The Fourth of July has come and gone, but last Saturday there were fireworks, of a musical sort, at the Blossom Music Festival.

Each summer I try to get to at least one concert at the Blossom Music Center, the summer home of the Cleveland Orchestra.

Saturday, my friend Cliff and I attended a concert that promised to be very good.  It turned out to be spectacular.

I forgot to take my camera. but Cliff snapped pictures of the Blossom pavilion and the interior prior to the beginning of the concert. 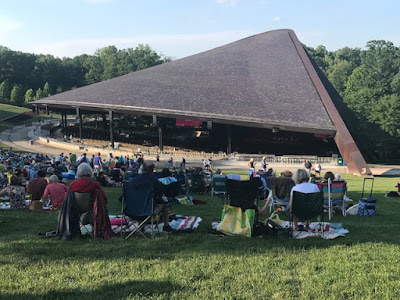 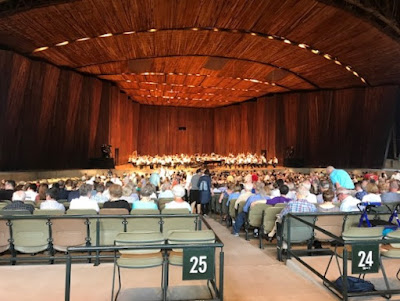 The Blossom Music Center was built in 1968 twenty five miles to the south of Cleveland in  forested countryside surrounded by the Cuyahoga Valley National Park.  More than 21 million people have attended concerts of all kinds, from classical to rock, since its opening.

I chose this concert because the program included Tchaikovsky's Symphony No. 4, one of my favorites.  The symphony, which was the concluding work of the concert, certainly did not disappoint, particularly climactic final movement.  However, the highlight of the evening was Prokofiev's Piano Concerto No. 3.   The soloist for the concerto was Conrad Tao, making his Cleveland Orchestra debut.

I had never heard of him before, but apparently the 25 year old musician and composer from Illinois has created quite a stir.  He was a child prodigy.  He gave his first recital at the age of four and began his studies at Julliard when he was nine.  He is described as iconoclastic.  Indeed, he appeared on stage without shoes and performed the concerto barefoot. 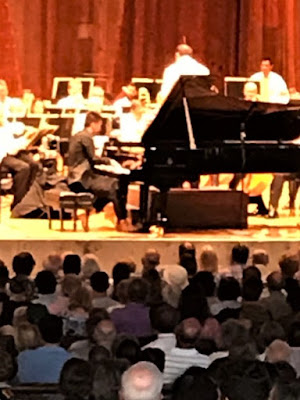 (Cliff surreptitiously snapped a photo during the performance.)

In recent years, Blossom has added two large screens on either side of the stage, and cameras give concertgoers close up views of the performers.  I was fascinated watching his fingers fly across the keyboard.  I could also watch his body movements and facial expressions while he played.  This is an artist who is not shy about abandoning himself completely into the music.  Cliff and I agreed that we had never seen anything like his performance.  The audience, of course, gave him a thunderous ovation, and after returning to the stage several times to acknowledge the applause, he gave us an encore, a portion of a Bach sonata.

It was another glorious evening with the renowned Cleveland Orchestra!
Posted by Retired Teacher at 9:14:00 AM