Going Downtown... or... A Break from Gardening

Every day I have been working in the garden.  I was planning to take a trip into downtown Cleveland on the next rainy day because I wanted to buy some Cleveland souvenirs to take to Mexico for Alejandro's family.

The forecast for Monday called for rain.  But when I checked the weather report on Monday morning, the rain was not expected until the evening.  So I worked in the garden.  On Tuesday it was supposed to rain, but when I got up and checked the forecast, the probability of showers had decreased.  So I worked in the garden.  This morning, Wednesday, the skies were overcast, but the weather report did not call for rain.  I decided, "I don't care!  I need a break!"   Before I had finished my breakfast it began to rain, and that clinched my decision.

I drove to the nearest station of the Rapid Transit System, parked my car, and took the train downtown.  It is a about a 25 minute ride.  Downtown Cleveland appeared on the bank of the Cuyahoga River. 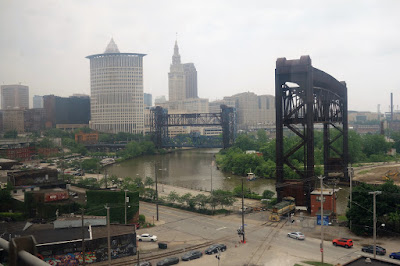 The train drops you off at the underground station of the Tower City complex.  Back in the days when train travel was the principal means of transportation, this was the site of Cleveland's grand train terminal.  In the 1980s the old station was redesigned as a shopping mall. 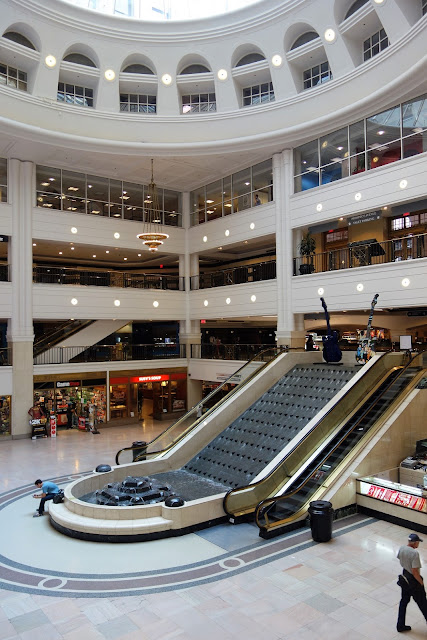 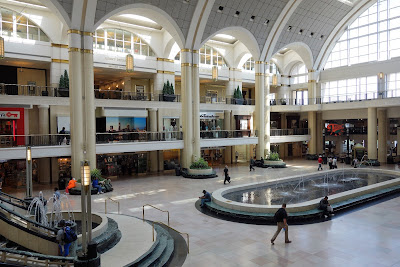 Unfortunately the shopping mall has declined and many storefronts now sit vacant.  The shop that I wanted to visit, a store selling Cleveland souvenirs, is no longer there.

The complex is called Tower City because above is Cleveland's most iconic building, the Terminal Tower. 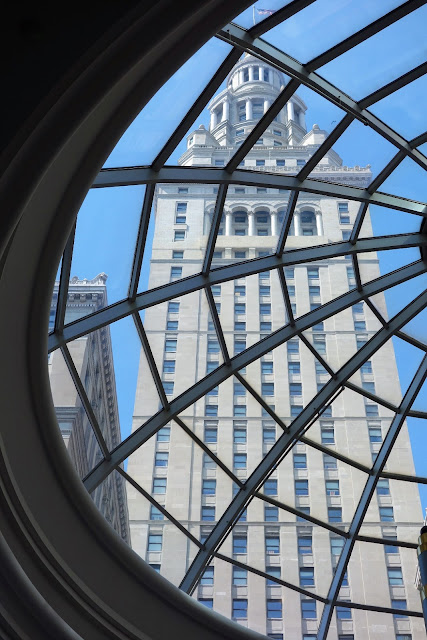 Looking up through the skylight at the Terminal Tower.
Yes, as you can see, the sun came out, and it turned out to be a beautiful afternoon. 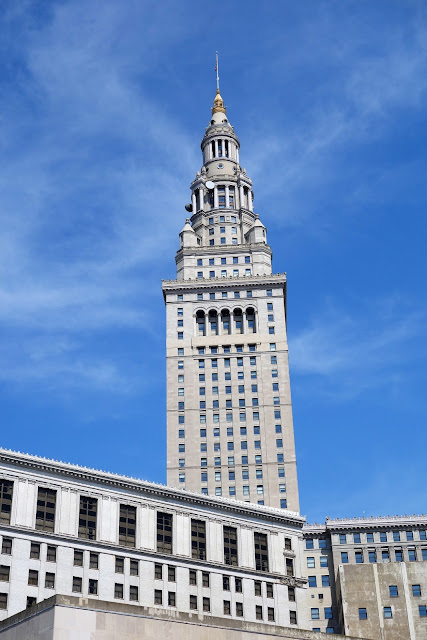 Since I couldn't do my intended shopping at Tower City, I headed outside to see if I could find someplace else that sold Cleveland souvenirs.

The vaulted ceilings of the entrance to Tower City are beautiful. 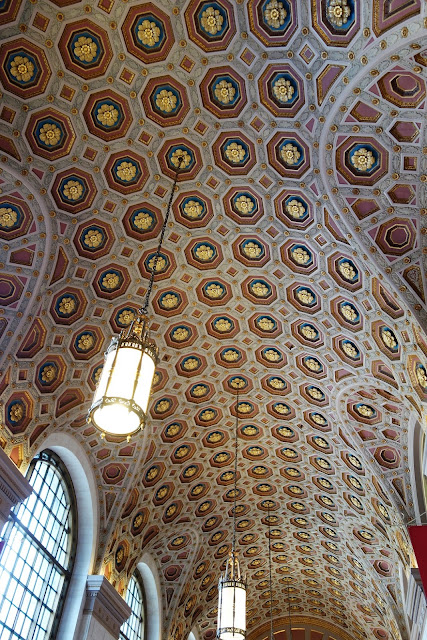 The Terminal Tower faces Public Square.  The square was recently renovated.  One new feature is a fountain built into the pavement.  It reminds me of a similar fountain in front of Mexico City's Monument to the Revolution.  And just as in Mexico City, on a warm day children like to play in the fountain. 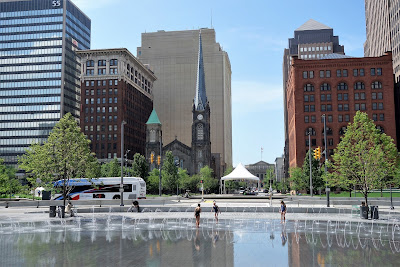 In the background you can see the historic Old Stone Church, a Presbyterian house of worship build in 1853. 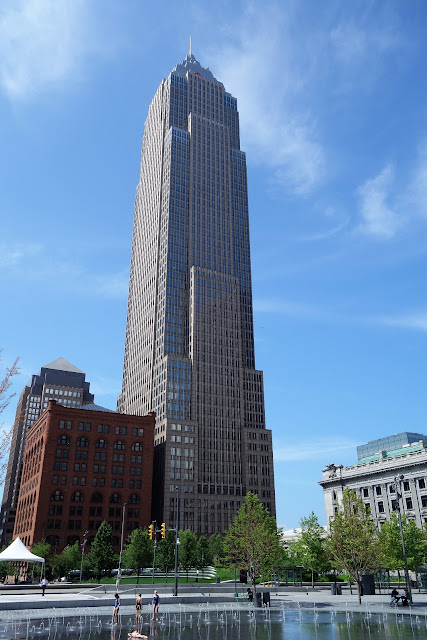 On one quadrant of Public Square is the Soldiers' and Sailors' Monument, built in 1894 to honor those who fought in the Civil War. 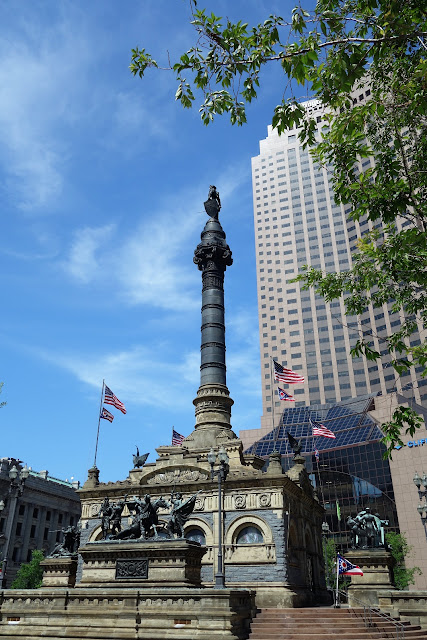 I headed down Cleveland's main street, Euclid Avenue.  I hoped that the Visitors' Center might sell souvenirs.  It didn't.  However next door was the Cleveland Clothing Company which sells tee shirts and other Cleveland related items.  I bought several things there.

I continued down the avenue to two old shopping arcades.  The Colonial Arcade was built in 1898 and the nearby Euclid Arcade in 1911.  The two have now been connected and are called the 5th Street Arcades. 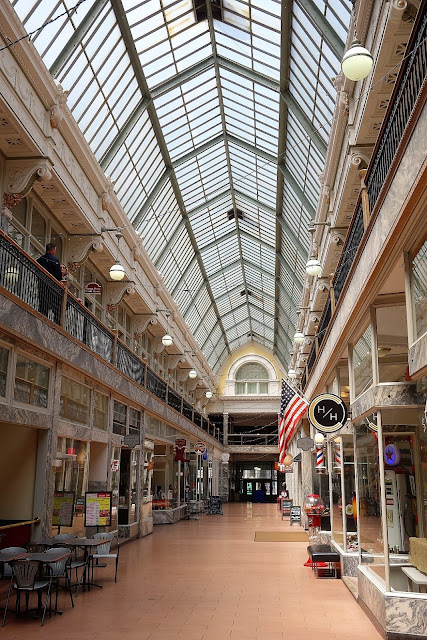 I remember these arcades as being depressingly unoccupied years ago.  Today, although occupancy is not at 100%, there are now some unique and interesting shops here.  Some sell local merchandise, and I bought some more gifts to take to Mexico.

Continuing down Euclid Avenue, I came to the extravagant building which was the headquarters of the former Cleveland Trust Bank.  It was built in 1907, and was designed by the same architect that built the New York Stock Exchange building. 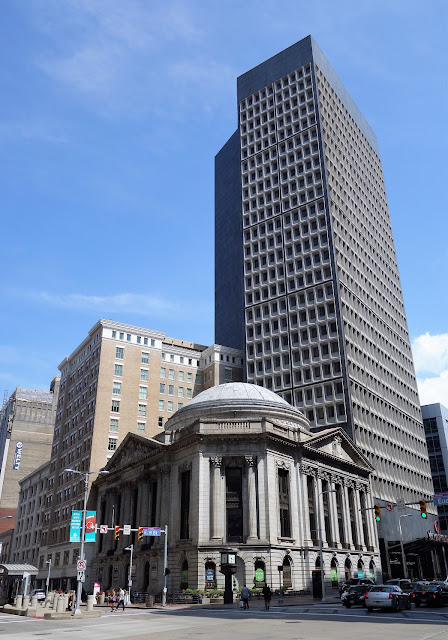 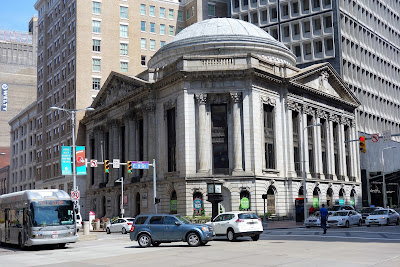 The bank was closed when Cleveland Trust merged with another bank, and for years this beautiful building sat empty.  A few years ago it was converted into an upscale supermarket.  I went inside, and it is the most elegant setting for a grocery store that I have ever seen!  In fact, one website ranks it as the second most beautiful supermarket in the entire country.

The store is centered around the rotunda of the old bank building. 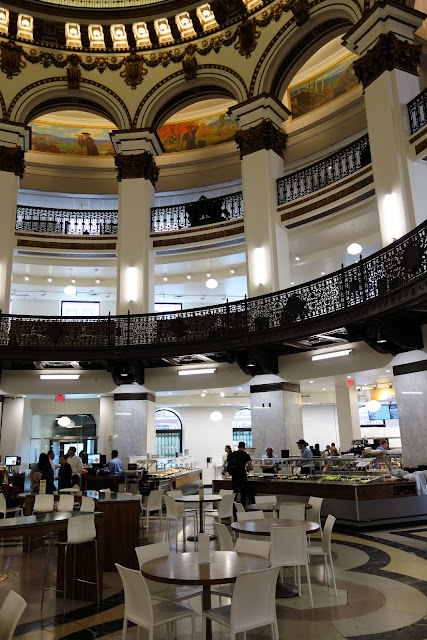 Look up at the gorgeous stained glass dome of the rotunda.  It was not designed by Tiffany, but it is in the same style. 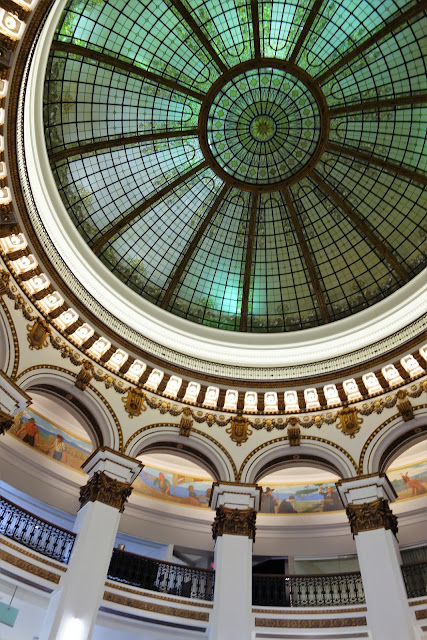 All around the rotunda are mural paintings entitled "The Development of Civilization in America". 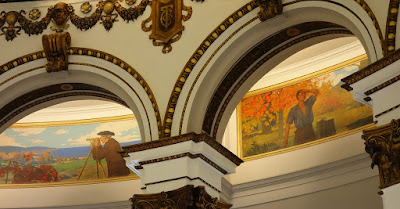 Back at ground level, there is a brass plaque in the very center of the rotunda. 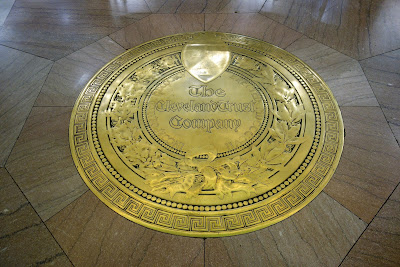 There are tables set up in the rotunda, and you can buy and eat lunch here.  There is a prepared foods counter, a soup bar, a salad bar and a bakery from which you can select your meal.  And that is just what I did!

It turned out to be great day and a welcome break from working in the garden.
Posted by Retired Teacher at 11:52:00 PM