Mexico City's National Museum of Anthropology is one of the great museums of the world.  Nowhere else in the world will you see such a huge collection of artifacts from Mexico's many pre-Hispanic civilizations.  I have visited the museum countless times.  It is so enormous that trying to see it all in one day is not only impossible, but exhausting.  On my last several visits I have concentrated on just relatively small portions.  Last February I spent time in the Mayan Hall.  Here is a small sample of the Mayan treasures. 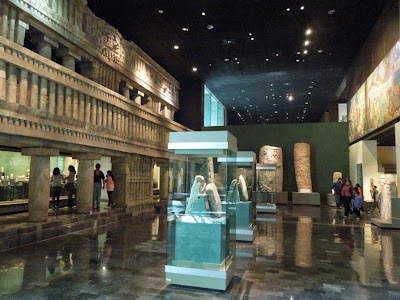 Most of the pre-Colombian civilizations had some form of picture writing, but the Mayas were the only ones to have a full-fledged writing system.  This Mayan stone is covered with  hieroglyphs. 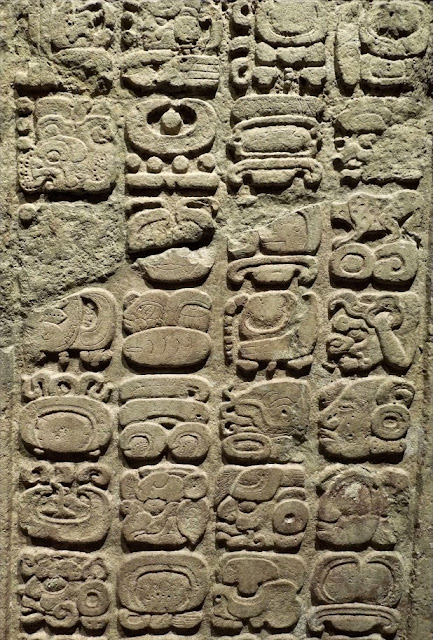 The Mayan hieroglyphs long baffled archaeologists.  In the second half of the twentieth century progress was made in deciphering the Mayan inscriptions, and today around ninety percent of the Mayan glyphs can be read.  I have read descriptions and seen TV documentaries about how the code was broken, and it remains beyond my comprehension.  Apparently the key was when the archaeologists realized that the glyphs represented syllables or were combined to represent several syllables. It was certainly one of the great archaeological achievements of recent times, and it has vastly increased our knowledge of the Mayan culture.

One feature found in the Mayan cities of the Classic Period (AD 250-900) were monuments known as stelae.  These large stone slabs are covered with carvings and inscriptions.  It was originally thought that they were representations of Mayan mythology, but now that the inscriptions can be read, archaeologists know that most of them commemorate important events in the lives of the Mayan kings.  They were art used as propaganda to glorify the kings. 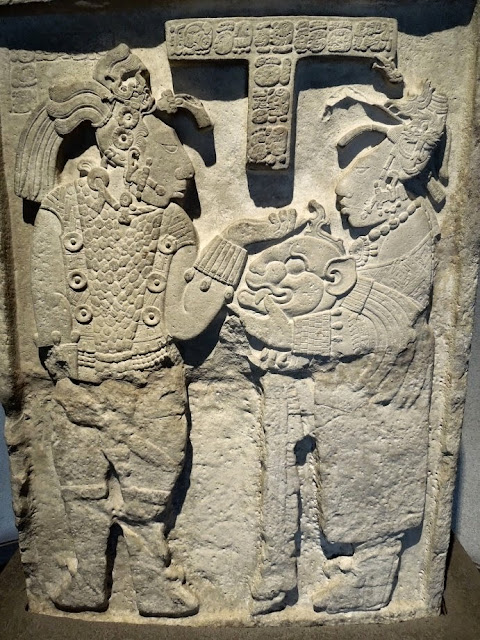 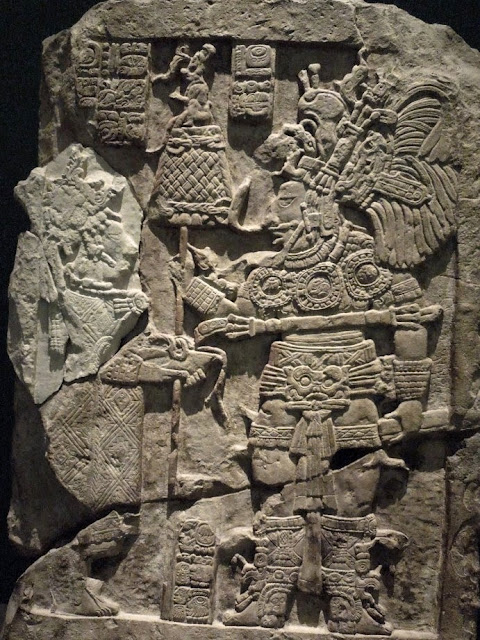 On the small island of Jaina, just off the coast of Yucatan, more than 1000 Mayan burial sites have been excavated.  The graves contained large numbers of beautifully crafted ceramic figurines.  It is not known what the purpose of these figurines was, but they provide a window to the appearance, dress and daily life of the Maya. 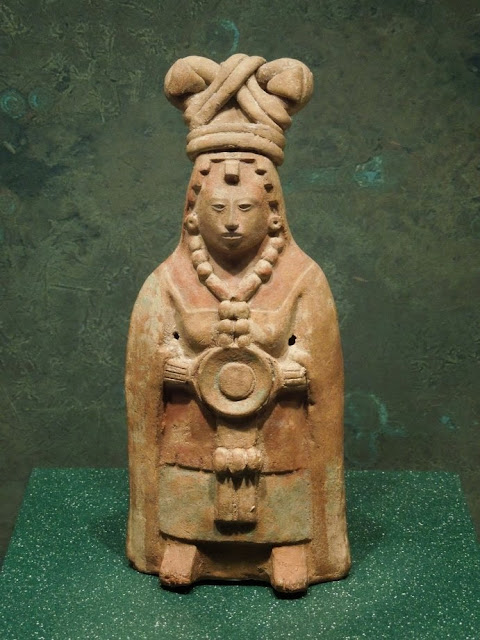 One of the most important gods of the Maya was Chac, the rain god.  His image appears on many Mayan temples.  This mask of Chac is from a temple in the ruins of Kabah in Yucatan.  Chac is easily recognized by his long nose, similar to an elephant's trunk. 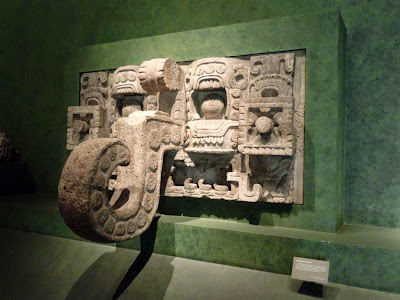 This statue is known as a "chac mool"   The "chac mool" is a reclining figure holding a bowl or plate over his belly.  These figures have been found in Toltec and Aztec sites, and several were found at the Mayan ruins of Chichén Itzá.  (The Mayan carvings are much more refined in style than those of the Toltecs and Aztecs.)  The actual name for these carvings is unknown.  In the 1800s a French archaeologist found one of the statues at Chichén Itzá, and erroneously thought that it depicted King Chaacmol.  The name stuck.  It is thought that offerings to the gods... food, flowers, incense, even human hearts.. were placed on the plate that the "chac mool" holds. 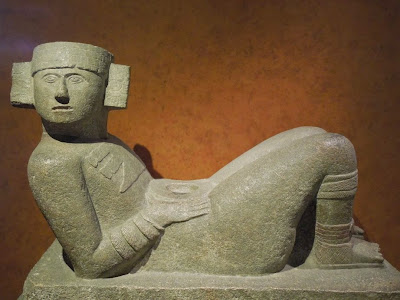 One of the most fascinating sections of the Mayan Hall are the displays relating to the royal tomb of the city of Palenque.  Palenque, which is located in the southeastern state of Chiapas, was one of the most beautiful and powerful cities of the Classic Period.  In 1952, a Mexican archaeologist discovered a tomb deep within the city's principal pyramid.  The tomb contained the remains of King Pakal, and it was the first time that a burial had been discovered within a Mexican pyramid.

From the museum's Mayan Hall, you descend a flight of stairs to see a recreation of Pakal's burial chamber. 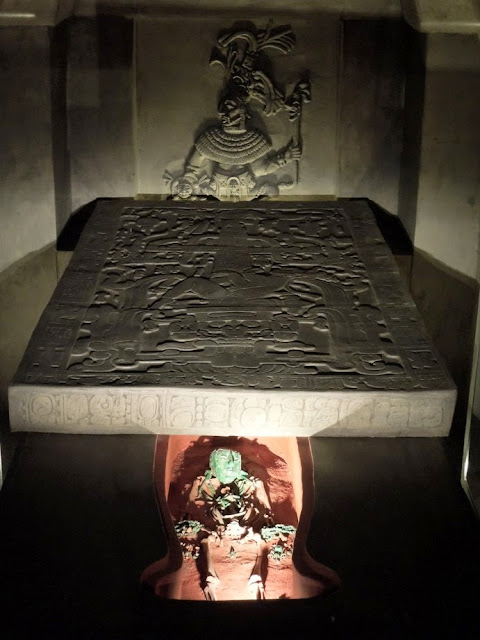 A large, intricately carved, stone slab covered the tomb.  Along the sides of the slab are hieroglyphics, which we know, now that Mayan writing has been deciphered, tell the family history of Pakal.  The top of lid portrays Pakal poised between the heavens and the underworld.  With great difficulty the slab was lifted, and beneath were the undisturbed remains of the king.

This stucco sculpture, found in the burial chamber, is thought to be a portrait of Pakal. 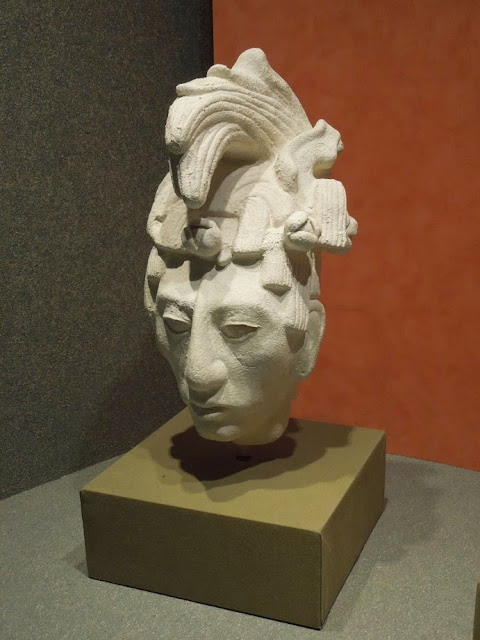 The king was buried with a trove of jade jewelry. (To the Mayas, jade was more valuable than gold.)  The jewelry, including the famous jade mask which covered his face, is on display in the museum. 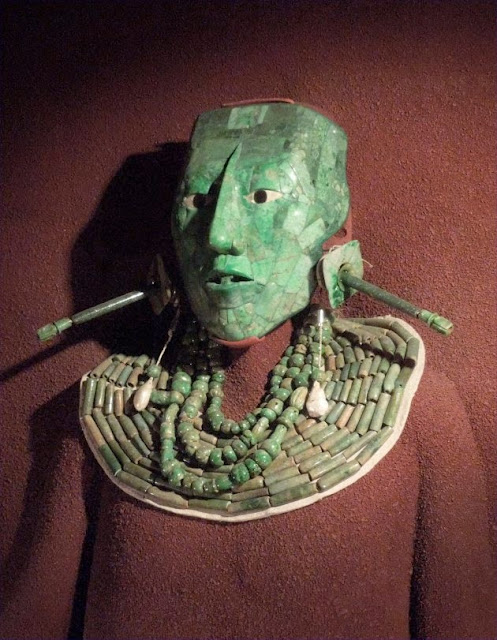 On Christmas Eve of 1985, there was a robbery at the Anthropology Museum.  Two students, obsessed with archaeology, made their way into the museum through the air-conditioning duct, and stole over 100 small but priceless objects... including the jade mask of Pakal.  The objects were all so famous that it was doubted that the robbers would be able to successfully sell them.  It was feared that the treasures were lost forever.  Then, in 1989, police tracked down and arrested one of the thieves in Acapulco, and recovered almost all of the stolen goods.  Pakal's mask was returned to its place of honor... and, hopefully, the museum's security has been beefed up since then.