In Mexico City there is a busy traffic circle named Plaza de Etiopía where four avenues... Xola, Cuauhtémoc, Diagonal San Antonio and Cumbres de Maltrata... all converge.  It is also the location of a Metrobus stop and a subway station.  It might not seem that odd that there is a traffic circle named after an African nation.  After all there are streets in Mexico City named after everything from European cities to foreign rivers to states in the U.S.  However there is an interesting story behind the name of Plaza de Etiopía.

In 1935 the Italian dictator Mussolini sent his troops to invade the independent country of Ethiopia.  The League of Nations met to deliberate, and Mexico was one of only five members that voted to condemn the act of aggression.  After World War II, Mexico and Ethiopia established diplomatic relations.  In 1954, Ethiopian Emperor Haile Selassie was the first African head of state to visit Mexico.  In honor of his visit, the traffic circle was given its name.  The Emperor visited the plaza and saw this plaque. 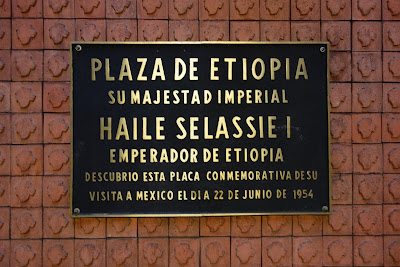 Today the plaque is in the subway station beneath the plaza along with information about the relationship between the two nations.

Ethiopia reciprocated by renaming a square in its capital of Addis Ababa as Plaza Mexico.
Posted by Retired Teacher at 11:52:00 AM